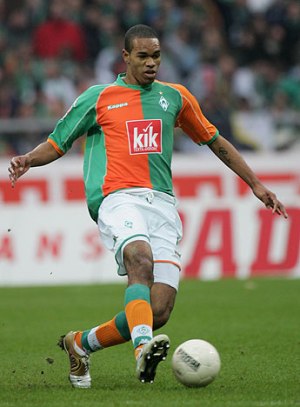 Ronaldo Aparecido Rodrigues, also known as Naldo was born on the 10th of September 1982 and is a Brazilian football player who plays for Werder Bremen in the German Bundesliga.

He plays as a versatile two-footed central defender, signing in the summer of 2005, to replace Valérien Ismaël who left for FC Bayern Munich. However, he is capable of playing right across the back line.

During his first few weeks at Bremen fans likened him to an Ox due to his immense height and athletic build, as a result he was nicknamed the beast a name also shared by players Mamady Sidibe and Jon Parkin.