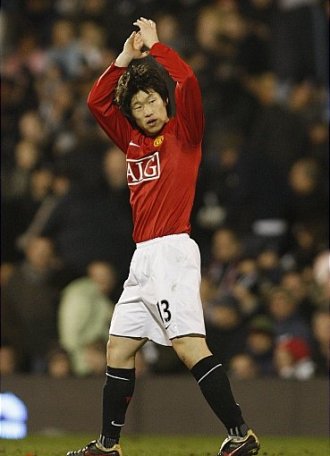 Park Ji-Sung was born on the 25th of February 1981 and is a South Korean professional footballer who plays for the English club Manchester United.

Park is also the captain of the South Korean national team and he is the only Korean player to win the UEFA Champions League and the first Asian to play in a final of the tournament.

Park joined Sir Alex Ferguson’s Manchester United in 2005. Ferguson was impressed with Park’s lively style of play, terrific pace, and unparalleled fitness. Park signed for the Premier League side for £4 million, subject to a medical and work permit.

Park became the first Asian to ever captain Manchester United when Ryan Giggs passed the armband to Park as he was being substituted in a European home game against Lille OSC. His first goal for Manchester United came on 20 December 2005, during a 3–1 win over Birmingham City in the League Cup fifth round.

In April 2007, Park was sent to America for surgery on a recurring knee injury, putting an end to his season. Although sidelined by injury for most of the season, he still played in enough matches to become the first Korean player to win the Premier League.