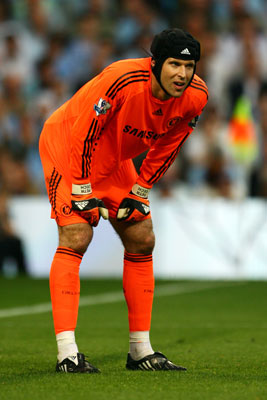 Petr Cech was born on 20th May 1982 in Plzen, Czechoslovakia, now Czech Republic and is a Czech international football goalkeeper who is currently contracted to English Premier League football club Chelsea, for whom he has played since July 2004. Petr Cech has previously played for Viktoria Plzen, Chmel Blšany, Sparta Prague, and Rennes.

He was voted into the all-star team of Euro 2004 after helping his country reach the semi-finals. Cech also received the individual award of Best Goalkeeper in the 2004/2005, 2006/2007 and 2007/2008 seasons of the UEFA Champions League. In addition, he was named in the FIFPro and UEFA Champions League teams of the season in 2006.

He currently holds one record which is a Czech professional league record of not conceding a goal in 855 competitive minutes (he previously held a record for the most clean sheets accomplished in a single Premier League season (25), set during Chelsea’s 2004–05 title-winning campaign).

He also has a club record at his former team Sparta Praha, having gone 928 minutes unbeaten in all competitions in 2001–2002, when his unbeaten run in Czech league competition was combined with his performances in the UEFA Champions League. During the 2004–05 season, Cech went 1,025 minutes without conceding a goal – a former Premier League record until Edwin van der Sar of Manchester United broke it on 27 January 2009.

Cech started out as a midfielder and striker for the youth team of his hometown club Viktoria Plzen, occasionally taking the centre forward position in games. He started playing in goal when their main goalkeeper couldn’t come anymore. This is when he switched to playing in goal instead.

Cech is married to Martina Cechova who is also of Czech nationality. They have daughter Adela and they are currently expecting their second child together.