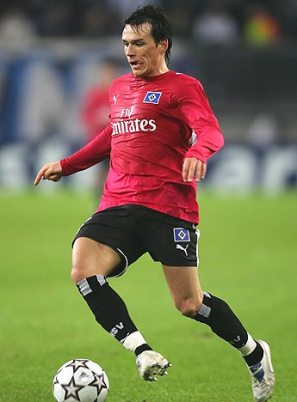 Piotr Trochowski was born on the 22nd of March 1984 in Tczew and is a Polish-born German footballer who plays as an attacking midfielder for Hamburg and Germany. He is known for his powerful shots and skillful dribbling.

As a 9-year old boy, Trochowski started his career with Billsted Horn, then played for Concordia Hamburg, and for St. Pauli, in Hamburg. In 1999, he transferred to Bayern Munich, starting with its junior side then progressing to the amateur team. However, he became frustrated with his lack of playing time.

In January 2005, he moved back to Hamburg to play for Hamburger SV. Team manager Thomas Doll gave him a chance and Trochowski proved his worth. Within two seasons, he played himself into the starting line-up of the team, scoring five goals (including one (and an assist) against former team Bayern Munich, in a 24 September 2005 2-0 home win) in his first full season as Hamburg reached the UEFA Champions League.

One year after his move to Hamburg, senior national coach Joachim Löw called him for the first time, and he debuted in an 7 October 2006 friendly against Georgia. After having appeared six times during the qualification matches, Trochowski was selected for the final 23-man squad for Euro 2008. He scored his first goal for Germany on 15 October 2008 in a 2010 World Cup Qualifier against Wales.