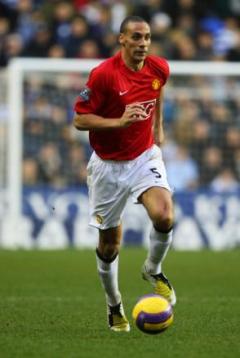 Rio Gavin Ferdinand is an English footballer. He plays as a centre back for Manchester United in the Premier League and at the international level for the England national football team. He has achieved 70 caps for the English national team while being selected for three FIFA World Cup squads. He is currently the vice-captain of the England national team and stand-in captain for Manchester United.

Known for his physical presence and composure on the ball, Ferdinand began his football career playing for various youth teams, finally settling at West Ham United where he progressed through the youth ranks and made his professional Premier League debut in 1996. He became a fan favourite, winning the ‘Hammer of the Year award’ the following season. He earned his first senior international cap in a match against Cameroon in 1997, setting a record as the youngest defender to play for England at the time. His achievements and footballing potential attracted Leeds United and he transferred to the club for a record-breaking fee of £18 million. He spent two seasons at the club, becoming the team captain in 2001.

He joined Manchester United in July 2002 for around £30 million, breaking the transfer fee record once more. He won the Premier League, his first major club honour, in a successful first season at the club. He missed a drugs test and was banned from competition for eight months, causing him to miss half a Premier League season and the Euro 2004 international competition. Upon his return, he established himself in the Manchester United first team and received plaudits for his performances, featuring in the PFA Team of the Year three times in four years. More club success followed with another Premier League win in the 2006–07 season and a Premier League and UEFA Champions League double the following year. His importance to the national team was underlined in March 2008 when Ferdinand captained England for the first time.

Ferdinand has two sons, Lorenz and Tate, with his fiancée Rebecca Ellison. His family is known for footballing prowess, brother Anton Ferdinand is also a centre back and former England international Les Ferdinand is his cousin.