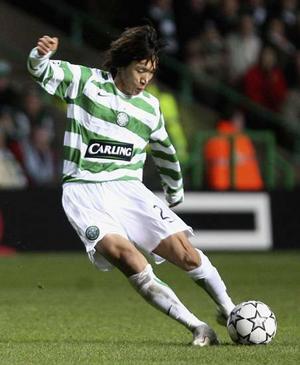 Shunsuke Nakamura was born on the 24th of June 1978 in Yokohama, Kanagawa Prefecture and is a Japanese football player who currently plays for Espanyol in the Spanish top flight. He is one of the most prominent and successful Asian players to have played in Europe and on 13 September 2006 became the first Japanese player to score in the Champions League and the second Asian player to do so. He is also well known for his free kick-taking abilities.

Nakamura has won the Asian Cup in 2000 and 2004 with the Japanese national football team, and was named Most Valuable Player in the 2004 competition. He has also appeared in the 1997 FIFA World Youth Championship, and the 2000 Summer Olympics as a member of the Japanese Under-23 team.

In his first season with Celtic, Nakamura helped the club win the Scottish Premier League and Scottish League Cup. His contributions to the Japanese national football team are represented by 22 goals. His former clubs include Yokohama F. Marinos and Reggina, for whom he scored 38 and 12 goals respectively before moving to Celtic on 25 July 2005 for a fee of around £1.25 million.

Nakamura is a winger usually deployed by Celtic on the right hand side of midfield. He had previously been positioned in the centre or on the left hand side of the pitch, since he is left-footed.

He is known for his vision and touch, as well as being a set-piece specialist. He can create scoring opportunities for his teammates but is also capable of scoring himself. Former Shimizu S-Pulse and Kashiwa Reysol manager and Tottenham Hotspur player Steve Perryman once remarked that Nakamura was so good, he “could open a tin of beans with his left foot”.