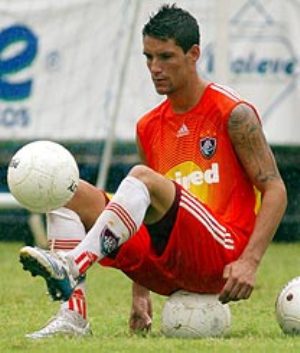 Thiago Neves Augusto or simply Thiago Neves was born on the 27th of February 1985 in Curitiba, Brazil, and is a Brazilian International footballer. He plays as an attacking midfielder and currently is playing for Fluminense on loan from Al-Hilal.

He accomplished the unique feat of scoring a hat-trick in a cup final (during the 2008 Copa Libertadores) but ending up on the losing side, as Fluminense drew 5-5 on aggregate with LDU de Quito and were eventually downed in the penalty shootout.

He had been strongly linked with a move to many clubs across Europe. Manchester City were believed to be leading the race to sign the young midfielder but clubs such as Atletico Madrid and Hamburger SV were also believed to be interested.

On Saturday, 30 August 2008, it was announced that Thiago Neves is an official Hamburger SV player and is seen as the ideal replacement for the outgoing Rafael van der Vaart. He left the club on 31 January 2009 and joined Al-Hilal for €7 million, the Saudi club loaned him out to Fluminense.

He made his international debut in a friendly match against Sweden on March 26, 2008. Later that year, he was called up to be part of the Brazil U-23 team for the 2008 Summer Olympics, where Brazil went on to finish third and achieved a bronze medal.