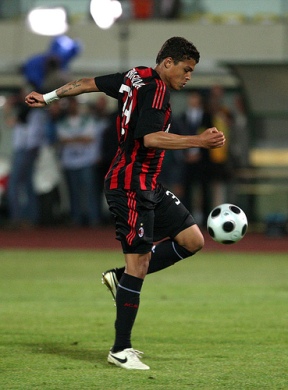 Thiago Emiliano da Silva, or simply Thiago Silva was born on September 22, 1984 and is a Brazilian international footballer who plays as a defender for Serie A club AC Milan.

As a youngster, Thiago Silva trained with Fluminense but was not signed by the club when he grew older. He was, however, offered a professional contract by small Rio Grande do Sul state club RS Futebol, in the south of Brazil, and was then quickly picked up by nearby Juventude, with whom he had an excellent debut season in the First Division in 2004.

By this time Thiago Silva, formerly a right winger who also had spells in midfield and at full-back, had been converted into a centre-back. And he was good enough to attract the attention of European clubs. Firstly he played for FC Porto then became one of the shopping list of Dynamo Moscow. In that transfer window, Thiago move along with other Portuguese Liga player likes Derlei, Cícero, Danny Alves and Nuno Frechaut. But spells with Porto and Dynamo Moscow were blighted by injuries and illness, and he returned to Brazil to rebuild his career with the club he supported in his youth. Fluminense finished fourth in the Campeonato Brasileiro Série A, conceding only 39 goals in 38 games and winning the Copa do Brasil.

In December 2008, Thiago Silva joined Milan under a €10 million agreement. Thiago Silva is expected to be officially registered as a Milan player from July 2009, since his new club already signed two non-EU nationals during the season namely, Andriy Shevchenko and Tabaré Viudez. He made his non-competitive debut with a rossoneri jersey in a friendly match against Hannover 96 on January 21, 2009. He played all 90 minutes for the Rossoneri in that match.

Thiago Silva was selected by Dunga to play for Brazil in the 2008 Summer Olympics. As has long been the case for the Olympic football tournament. He was one of two players over 23 years of age, the other one being Ronaldinho, playing 3 matches. Before the Olympics started he earned his only two caps in friendlies against Singapore and Vietnam. Thiago Silva was selected to play for Brazil in an International Friendly against Italy at Emirates Stadium on 10 February 2009. He came on in the 77th minute replacing Juan. 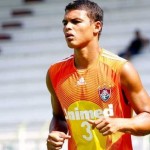