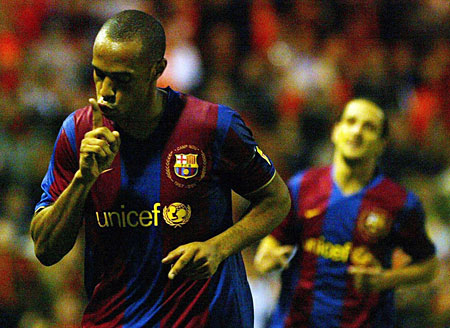 Thierry Daniel Henry is a French footballer who plays for Spanish La Liga club Barcelona and the French national team as a striker.

Henry was born and brought up in the tough neighbourhood of Les Ulis, Essonne—a suburb of Paris—where he played for an array of local sides as a youngster and showed great promise as a goal-scorer. He was spotted by AS Monaco in 1990 and signed instantly, making his professional debut in 1994. Good form led to an international call-up in 1998, after which he signed for the Italian defending champions Juventus. He had a disappointing season playing on the wing, before joining Arsenal for £10.5 million in 1999.

It was at Arsenal that Henry made his name as a world-class footballer. Despite initially struggling in the Premiership, he emerged as Arsenal’s top goal-scorer for almost every season of his tenure there. Under long-time mentor and coach Arsène Wenger, Henry became a prolific striker and Arsenal’s all-time leading scorer with 226 goals in all competitions. The Frenchman won two league titles and three FA Cups with the Gunners. He was twice nominated for the FIFA World Player of the Year, was named the PFA Players’ Player of the Year twice, and the Football Writers’ Association Footballer of the Year three times. Henry spent his final two seasons with Arsenal as club captain, leading them to the UEFA Champions League final in 2006.

In June 2007, after eight years with Arsenal, he transferred to FC Barcelona for a fee of €24 million. His first honours with the Catalan club came in 2008–09 when they won the league, cup and Champions League treble.