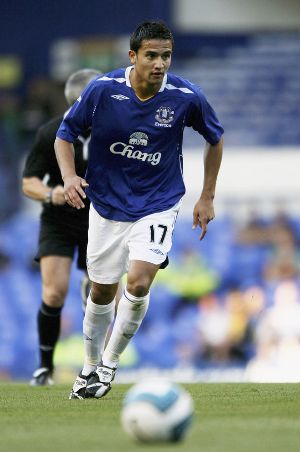 Timothy Joel “Tim” Cahill was born on 6th of December 1979 and is an Australian professional football player who currently plays as an attacking central midfielder for the Australian national team and English Premier League side Everton, where he also has played striker.

Cahill has become one of the highest profile footballers in the Asian Football Confederation. He is well known for his heading ability (despite only being 1.78m) and his perfectly judged “Cahill Expressway” runs into the box.

Cahill scored the first goal by an Australian at a FIFA World Cup, and has also kicked the most goals by any Australian in the World Cup. In 2007, he also became the first Australian player to score at an Asian Cup.

Cahill was born in Sydney to a Samoan mother and an English father, of Irish descent, and was encouraged to play football as a child.

In 1997, Cahill asked his parents to allow him to travel to England to play professionally, where he was signed by Millwall on a free transfer from Sydney United. He made his Millwall debut on 22 May 1998. In the 2003-2004 season, Cahill was the workhorse in Millwall’s heroic campaign which led them to the FA Cup final for the first official time in their history, scoring in the semi-final against Sunderland, and securing a UEFA Cup place.

Before the start of the 2004-2005 season, Cahill’s transferred to Everton FC for a fee of £1.5 million after he turned down a move to Millwall’s South East London rivals Crystal Palace.

Ribery only has Real Madrid in his mind