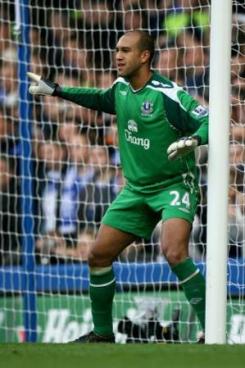 Timothy Matthew “Tim” Howard was born on March 6, 1979, in North Brunswick Township, New Jersey and is an American international football goalkeeper who plays for Everton of England and the United States national team.

Tim Howard was born in North Brunswick, New Jersey to Matthew Howard, an African-American, and Esther Howard, a Caucasian woman born in Hungary.

On February 14, 2007, Everton announced that Howard had signed a permanent deal with the club through the 2012–13 season. The permanent deal was believed to be worth around £3 million, but the exact fee paid by Everton remains undisclosed.

During the 2008–09 season Howard set the club record for most league match clean sheets in a season.

Howard has Tourette syndrome and was named MLS Humanitarian of the Year in 2001 for his work with children with Tourette’s. He is a committed Christian and has been involved with Athletes in Action, a ministry arm of Campus Crusade for Christ.