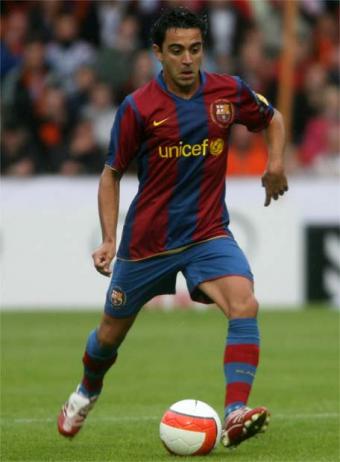 Xavier Hernández i Creus, commonly known as Xavi, is a Spanish footballer who plays as a central or defensive midfielder for FC Barcelona. Widely considered among the finest playmakers in world football, Xavi has been capped more than 70 times for the Spanish national team and has played for his country in the 2000 Summer Olympics, 2002 FIFA World Cup, UEFA Euro 2004, 2006 FIFA World Cup and UEFA Euro 2008. He was named Best Player by UEFA at Euro 2008 and was one of the five finalists for FIFA World Player of the Year 2007-2008. He was named the official Man of the Match of the 2009 Champions League Final, as he helped Barcelona defeat Manchester United to win their third European Cup.