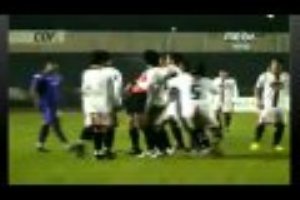 Chilean second division match turns ugly as player tried to grab the referee around the throat and tried to choke him during a weekend match.

It took place shortly after Miranda made Concepcion to take a penalty kick four times, waving off attempts because of infractions.

“I’m not the least bit sorry,” Pedroso was quoted saying in the Chilean newspaper La Tercera.

Miranda did not file charges.


David Villa : I Joined Barcelona To Play In El-Clasico