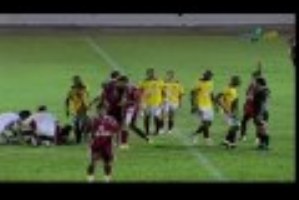 Police used pepper spray on a player who refused to leave the pitch during a lower league match in Brazil.

Genus were trailing 3-0 to Moto Clube in a Serie D match when Robson was dismissed for a poor challenge, but he and four team-mates reacted angrily and confronted the referee.

The incident led riot police to enter the field with shields and batons and they eventually used pepper spray as Robson resisted their attempts to remove him from the pitch. The match was abandoned and is due to be replayed.

Robson and six other Genus players have resigned over the incident, along with the coach.