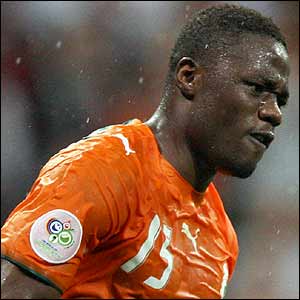 Interesting transfer news are out and it has been reported that according to Lens club president Gervais Martel, striker Aruna Dindane is closing in on a move to Premier League club Portsmouth.

However newspaper reports in the south of France claimed that a deal had been struck for the 28-year-old former Anderlecht striker to join Monaco.

But Martel said Portsmouth head the queue for the Ivorian, even though they cannot buy any players until Dr Sulaiman Al-Fahim completes a takeover of the cash-strapped club.

Martel also told reporters that the club will be meeting the Portsmouth directors between now and the start of next week.

Rennes midfielder Olivier Thomert is also believed to be on Pompey’s radar.


Skrtel Out For Two Weeks With Cracked Jaw