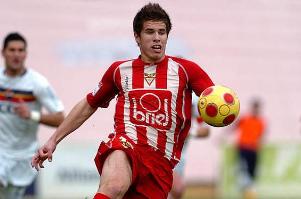 Portuguese starlet Joao Silva is thrilled with his move to Everton.

It has been reported that the Toffees have agreed a £500,000 deal with second division Portuguese side Deportivo Aves, and the 19-year-old striker will join in July.

Joao Silva said: “I am calm and working for my club now, but I am happy because to play in the Premier League is a dream for any footballer because it is the best in the world.

“Everton are a great club, I have seen them on television and they have great players.

“Due to my own characteristics, I believe it (England) will be perfect for me – it will be an enormous move for me but I am ambitious and will stay positive.”


Arsenal On The Brink Of One Major Signing