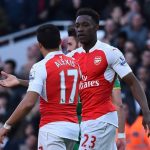 6′ – CHANCE: Norwich are showing plenty of attacking intent early on and Olsson’s cross from the left flank runs all the way through to Redmond at the back post, who controls before hammering a shot that Cech blocks with his leg.

11′ – CHANCE: Another neat Arsenal move culminates with Ramsey feeding Giroud but, after working himself a yard of space, the Frenchman sees his low shot blocked by Martin.

38′ – CHANCE: Koscielny meets Ozil’s corner at the near post but his header under pressure flies just over Ruddy’s crossbar.

42′ – CHANCE: Redmond was identified by Arsene Wenger pre-match as Norwich’s biggest attacking threat, and the winger underlines his talent once again with a shot that stings the palms of Cech from a tight angle.

49′ – CHANCE: Wenger’s half-time team talk doesn’t seem to have made much of an impact, with Arsenal still lacking intensity and Norwich showing the greater ambition. Redmond flashes in a cross from the right and Jerome attacks it, missing the ball by inches.

59′ – GOAL! Arsenal 1-0 Norwich. Now that’s what you call an impact substitute! Bellerin clips a cross in from the right, Giroud knocks it down and Welbeck lashes the ball into the bottom corner with the aid of a slight deflection off Bassong. Frustration turns to relief.

70′ – CHANCE: Great work from Redmond to race away from Monreal on the right, and the winger’s low cross forces Gabriel into a last-ditch sliding block to prevent Mbokani having a simple tap-in.

71′ – CHANCE: Arsenal counter with pace and numbers from a Norwich corner and Ozil produces one of the passes of the season to give Alexis a shooting chance, but the Chilean’s toe poke flies straight into the arms of Ruddy.

82′ – CHANCE: Giroud smartly flicks the ball into the path of an onrushing Elneny and the Egyptian attempts a curling shot with the outside of his foot, but Ruddy flies to his right to tip the ball wide. Nice save.