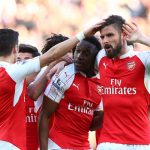 Danny Welbeck came off the bench to score the winner as Arsenal secured a narrow victory against Norwich City overshadowed by supporter protests.

Arsenal fans held up placards bearing the slogan ‘TIME FOR CHANGE’ in the 12th and 78th minutes at the Emirates Stadium to represent the club’s 12 years without a Premier League title, and for much of the afternoon it appeared that their team would produce a result that highlighted all of their deep-seated frustrations.

Norwich were the more dangerous team in a first half that saw Arsenal fail to muster a single shot on target, while at the other end the lively Nathan Redmond twice stung the palms of Petr Cech.

The withdrawal of youngster Alex Iwobi for Welbeck on 56 minutes was greeted with boos but the England international did not take long to make an impact, rifling a low shot into the bottom corner after Olivier Giroud had headed Hector Bellerin’s cross into his path.

Norwich pushed hard for an equaliser to boost their Premier League survival hopes after witnessing Newcastle United and Sunderland pick up points earlier on Saturday, but Arsenal held on to secure a win that moves them clear in third place.