Benik Afobe scored on his debut as Bournemouth beat Norwich 3-0 in the Premier League. 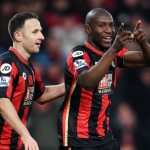 Dan Gosling opened the scoring for the home side with 10 minutes gone before Charlie Daniels converted from the spot shortly after half-time. Afobe, Bournemouth’s record signing, then opened his account for the club following a cool finish with 15 minutes remaining.

Both sides made one change from their midweek defeats. Bournemouth midfielder Marc Pugh came in for the injured Matt Ritchie while Gary O’Neill, sent off against Stoke, was replaced by Matt Jarvis. Lewis Grabban had been expected to feature against his former club but the forward, who re-signed for the Cherries in a £7million deal earlier this month, was said to be suffering from an illness.

Bournemouth may have suffered a 3-1 home defeat against West Ham on Tuesday night, but there was no sign of any hangover for Howe’s side. Indeed it was the south coast club – on a winless run of four matches heading into Saturday’s fixture – who came flying out of the blocks. Afobe fizzed a 20-yard effort over Declan Rudd’s bar with only two minutes gone, before Junior Stanislas’ deflected shot then fell into the hands of the grateful Norwich goalkeeper.

Bournemouth have gained a reputation as fast-starters – having scored six goals inside the opening 15 minutes which is more than any other Premier League club – and with 10 minutes on the clock they increased that tally to seven. Gosling ghosted unmarked into the Norwich area before Marc Pugh’s pinpoint cross was headed home by the former Everton midfielder. It was Gosling’s third league goal of the campaign and no less than the home side deserved for their early endeavour.