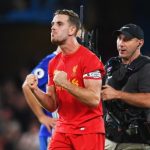 Much of the hype prior to the game was over David Luiz’s return to the Chelsea line-up in the absence of the injured John Terry, but the Brazil defender and the rest of the Chelsea backline were static spectators for Dejan Lovren’s 17th-minute opener.

The Croatia defender was one of three red shirts unmarked at the back post for Coutinho’s angled cross, and his low first-time finish was arguably as good as anything Sadio Mane or Daniel Sturridge would have managed had they been ahead of Lovren in the queue.

But Lovren’s goal paled into insignificance compared to Liverpool captain Henderson’s strike on 36 minutes, an inch-perfect looping effort from 35 yards into the top corner of Thibaut Courtois’ goal.

In-form Diego Costa pulled one back for Antonio Conte’s side with a sharp finish from Nemanja Matic’s run and scooped cross just after the hour mark, but Liverpool doubled down to kill the game and hold on for the three points.