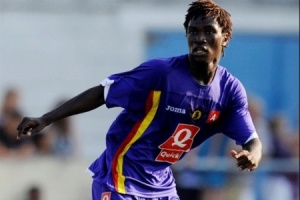 Reports are out that Premier League giants Manchester City and Arsenal are in the chase for Ghana youngster King Gyan Osei.

The 21-year-old midfielder formerly joined Fulham in 2007, but were fully aware he would not qualify to get a work permit and could not play in England, so he was sent on loan to Belgian club Germinal Beerschot Antwerpen.

It was hoped that after three years he would qualify for a work permit, but it transpires he will need a minimum of an additional 12-month residency to attain an EU passport.

King, who won his first full cap for Ghana last year, is now leaving Fulham after his contract expired.

But there is also interest in Belgium to sign him permanently with both Anderlecht and Standard Liege said to be keen.