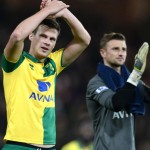 Alexander Tettey scored a superb late winner for Norwich moments after Victor Wanyama was sent off for Southampton.

Saints went into this game looking to stop a run of five league defeats from their previous seven games, but with speculation mounting that Manchester United are going to make a January move for Saidio Mane, Ronald Koeman opted to leave the Senegal star out of his starting line-up, with Mane believed to have been punished for reporting late for a team meeting.

Southampton were starved of Mane’s creativity and, with the game edging towards to a stalemate, the turning point came late on when Wanyama, already on a yellow card, was dismissed for a mindless tackle – and Norwich needed barely three minutes to capitalise.

The result is a huge one for Norwich, who drag themselves three points further away from the relegation zone, while Southampton’s woeful run continues as they slip closer to danger.