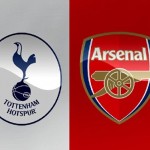 Tottenham Hotspur and Arsenal have the perfect opportunity to bounce back immediately from disappointing midweek defeats when they meet in the most significant North London derby for years at White Hart Lane on Saturday.

While matches between the arch-rivals are always tense, highly-charged occasions, Saturday’s Premier League game has added spice because both are heavily involved in the title race and both lost ground on leaders Leicester City on Wednesday.

Spurs’ six-match winning league run ended in a 1-0 defeat at West Ham United while Arsenal suffered a second successive league loss, and a third in all competitions, surprisingly beaten 2-1 at home by relegation-threatened Swansea City.

Leicester, who drew 2-2 with West Bromwich Albion on Tuesday and play at Watford on Saturday, lead the table with 57 points with Spurs second on 54, Arsenal third on 51 and Manchester City fourth on 47 with a game in hand.

Spurs have not been this high in the table this late in the season since 1985 which is why Saturday’s game has more at stake for both teams than any since the 1991 FA Cup semi-final at Wembley which Spurs won 3-1 thanks in part to a goal from Paul Gascoigne.