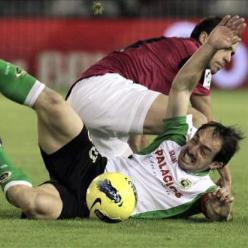 Ambitious Malaga climbed above Sevilla into fifth in La Liga when teenage midfielder Isco and Uruguayan forward Seba Fernandez struck in a 3-1 win for the Qatar-owned club at struggling Racing Santander on Monday.

The 19-year-old Isco pounced on a loose ball to open the scoring in the 48th minute at the Sardinero before Alvaro Gonzalez diverted the ball into his own net to make it 2-0 in the 66th.

Manuel Arana pulled a goal back for the home side when he finished off a swift counter-attack four minutes later and substitute Ruud van Nistelrooy crossed for Fernandez to volley home with a minute of regular time remaining.

Malaga have 20 points from 12 matches, two more than their Andalusian rivals Sevilla, who lost 2-1 at home to Athletic Bilbao on Sunday, and three behind fourth-placed Levante, 3-2 losers at Atletico Madrid.

Santander, who have just one win under former Valencia and Inter Milan coach Hector Cuper this season, are on nine points and drop below Real Sociedad to the bottom of the standings on goal difference.