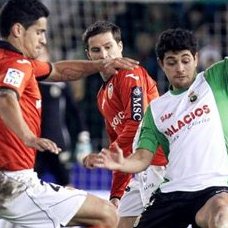 Valencia’s disappointing league form in 2012 continued as they conceded a late equaliser to drop two valuable points in a 2-2 draw at lowly Racing Santander.

Fourth-bottom Racing took a shock lead inside the opening two minutes through Adrian Gonzalez but Valencia hit back to go ahead with a second-half brace from substitute Aritz Aduriz.

Los Che could not hold onto their advantage, though, as Bernardo Espinosa drew the home side level in the 88th minute before both teams finished with 10 men as Racing veteran Pedro Munitis and Valencia defender Ricardo Costa were handed their marching orders in stoppage time.

The result means third-placed Valencia have now picked up only three points from a possible 12 since the start of the year and have fallen 16 points adrift of leaders Real Madrid.