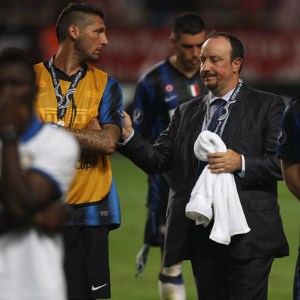 AC Milan won the Derby della Madonnina thanks to a Zlatan Ibrahimovic penalty.

The former Italian international played only five of Inter’s last 50 games, but was chosen to mark Ibrahimovic and gave away the spot-kick after just five minutes.

Benitez said : “He is not a debutant. He has a great deal of experience, we lost Walter Samuel and do not have many centre-backs to face someone like Ibrahimovic who is strong in the air,”.

“The whole game changed with that penalty after five minutes. Materazzi only made one mistake at the start, he did very well for the rest of the match.”

Materazzi was then stretchered off after a mid-air clash with Ibrahimovic left him barely conscious, but should the Swede have had more than a yellow card?

“It isn’t easy. It was a nasty collision, but it’s difficult to judge the intentions of the player. We can’t change anything now. He is alright, but clearly the doctor wants to do tests to be absolutely sure.”