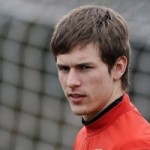 Aaron Ramsey’s double fracture to his right leg is not a career-threatening injury, Arsenal manager Arsene Wenger has confirmed.

“It is too far away to set any realistic deadline (on his recovery),” Wenger said. “Let’s let him heal.

“The good news is the surgery went well and it is not a career-threatening injury.

“But it is two breaks and to get back to your best you need not only to practice again but you need time to recover your co-ordination. He is a young boy and he will recover from this but it is a bad injury.”

Wenger did not mention Shawcross, whose tackle was viewed by most observers to be not malicious.

“We were all very sad and very down after what happened to him,” Wenger said. “The one thing we can do now is give him all the support it takes. Also this gives us one more reason to fight (for the title) until the end. We want to do it for him.”

“We have been in touch with Aaron,” he told Sky Sports News.

“We were as devastated as anybody could be and nobody wants to see that happen.

“There was no malice, no vindictiveness (in the tackle). It was an awkward challenge but he could have just as well hurt himself.”