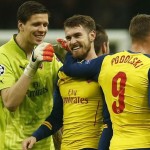 Aaron Ramsey is back and the Arsenal midfielder scored a ridiculous goal on Tuesday night.

After scoring his first goal in 16 matches against Stoke, he followed up with a brilliant brace in Istanbul.

Both goals were with his weaker left foot, but the second stood out: a spectacular volleyed strike from fully 35 yards.

With the game already won, he was withdrawn at half-time as a precautionary measure.

Could this goal by Aaron Ramsey a contender for goal of the century? Check it out and let us know what you think.