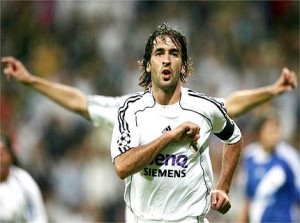 Raul later told reporters that he is very happy and that it was a major victory for the team and that is how the club must stay.

Raul also added that he is happy because there are three games per week and Real Madrid are playing at a good level.

He also added that on a personal level he is satisfied with this record in becoming the player to have worn the white shirt the most number of times. However Raul said that his mind is on Real Madrid’s next match.

Raul added that he is happy with how things are going for Cristiano Ronaldo as he is a good kid.