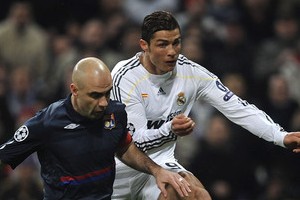 Real Madrid’s dreams of a Champions League final at their Bernabeu home were crushed by Lyon tonight as the Spanish giants were knocked out at the last-16 stage for the sixth successive season.

Cristiano Ronaldo’s seventh Champions League goal of the season gave Madrid the perfect early start as he netted after just six minutes to level up the aggregate scores at 1-1.

However, Madrid failed to make the most of a host of first-half chances and they paid the cost as Miralem Pjanic smashed home a 75th-minute equaliser for Lyon to send Manuel Pellegrini’s men crashing out.

With this year’s final being staged at the Bernabeu, Madrid had high hopes of reaching that final showpiece and the postmortem in the Spanish capital will almost certainly leave Pellegrini under more pressure.


Beckham : Rooney Is The Best In The World