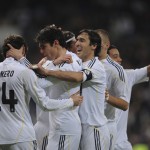 Sergio Ramos headed in from a freekick early on and Kaka doubled the lead after Carlos Kameni could only parry a Raul header in the 30th minute. Gonzalo Higuain returned from injury to grab a third at the end.

Getafe attempted to take the game to Barca by starting with two strikers but it was the home side who struck first when Messi curled in a shot from the edge of the area for his 16th goal of the campaign.