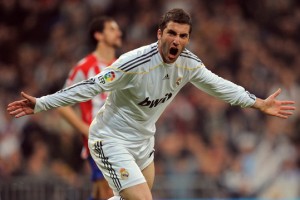 Real Madrid continued their perfect home record and provisionally moved three points clear at the top of Primera Division tonight, but they were given a scare by Sporting Gijon.

Madrid produced little of note during a disappointing first half against a determined Sporting, and a shock looked on the cards when the mid-table visitors took a 53rd-minute lead through David Barral.

However, that goal served to spark Madrid into life and within four minutes they were 2-1 ahead thanks to strikes from Rafael van der Vaart and Xabi Alonso.

Gonzalo Higuain then slotted home his 20th goal of the season in the 68th minute as Madrid made it 14 league wins out of 14 at the Bernabeu this term.

It was also Madrid’s ninth successive victory in the league and saw the Whites edge clear of second-placed Barcelona, who face a testing trip to Real Zaragoza tomorrow night.