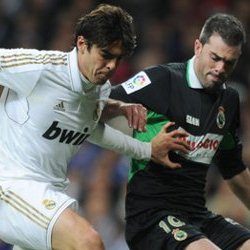 Real Madrid took another step towards their first Primera Division title since 2008 after provisionally moving 13 points clear of Barcelona with another convincing home win, this time over 10-man Racing Santander.

Cristiano Ronaldo headed Madrid into an early lead before Racing had defender Domingo Cisma sent off just before half-time for a second yellow card.

Karim Benzema then made it 2-0 just before the break and second-half goals from the Frenchman and Angel Di Maria completed a 20th win in 23 league matches this season for Jose Mourinho’s side.