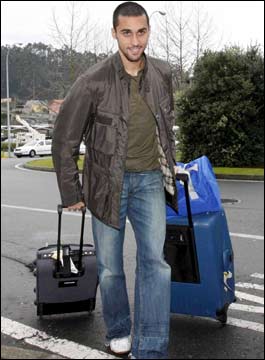 Sensational transfer news are out and it has been reported that Liverpool defender Alvaro Arbeloa is expected to join Real Madrid and it is believed that the defender will make a £4.5million switch to the Bernabeu next week.

But his fellow Liverpool teammate and Spanish international midfielder Xabi Alonso looks to have missed out on the chance of a move to Real Madrid.

Arbeloa,now aged 26, was signed from Deportivo La Coruna for £2.6m two years ago. However it is believed that Liverpool boss Rafa Benitez originally wanted £8.5m for the full-back, who made 43 appearances last season but Real Madrid responded with a bid of £2.5m but now the clubs appear to have reached a compromise figure of £4.5m.

Arbeloa’s agent Manuel Garcia Quilon said that discussions with Real are not over and he expect a solution early next week and Real sporting director Jorge Valdano reportedly said that Arbeloa is a basic part of Real Madrid’s plans.

Real have been looking to strengthen their defence and midfield after splashing out nearly £180m on forwards Cristiano Ronaldo, Kaka and Karim Benzema.