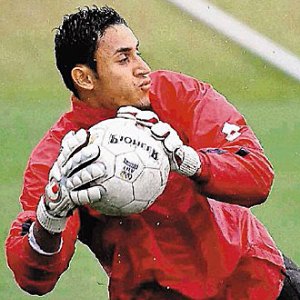 Interesting news are out and it has been reported that Spanish giants Real Madrid and Barcelona are keeping a close eye on Costa Rica goalkeeper Keylor Navas.

It has been reported that Navas’ form with Segunda Liga Albacete has led scouts to flock to his games this season – including from Barca and Real.

The 24 year-old only moved to Albacete in the summer from Costa Rica’s Deportivo Saprissa and has quickly adjusted to life in Spain.

According to Cadena Ser, Real Madrid, Barcelona and Atletico Madrid are all monitoring the progress of the 6ft 1in shot stopper.


Landon Donovan Concerned Over The Lack Of Consistency In Young Players