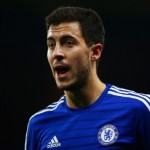 It has been reported that Real Madrid have their eyes on Premier League stars Raheem Sterling and Eden Hazard.

And they could be set to accept a United bid as they look to raid English football for two its finest young talents.

Chelsea star Hazard and Liverpool’s Sterling are both understood to be top targets for Real if they decide to cash in on Bale.

Hazard is one of Europe’s hottest assets and the Blues are desperate to tie him down to a new long-term deal at Stamford Bridge.

Ancelotti : Chelsea Will Not Sell Drogba!

Lucas Leiva Insists Liverpool Will Be Back Next Season