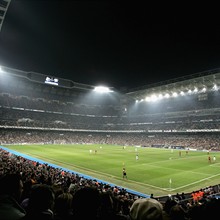 It has been revealed by the local Spanish media that football giants Real Madrid are hoping to raise almost £100 million from their summer sales.

So far, it has been reported that Real Madrid has managed only to offload Argentinian striker Javier Saviola since the end of the season and need to sell a raft of unwanted players to balance the books.

It has also been reported that Javier Garcia is a step away from joining Benfica, while Real will also listen to offers for ex- Manchester United striker Ruud van Nistelrooy.