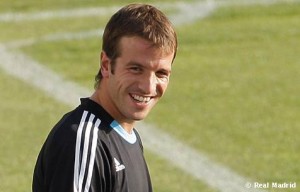 Interesting news are out and it has been reported that Spanish giants Real Madrid are ready to sell midfielder Rafael van der Vaart in January.

Local Spanish newspapers have reported that Real Madrid are seeking £7 million for the Dutch international midfielder, who has Premier League clubs Arsenal and Everton chasing his signature.

It is also believed that Van Der Vaart is also being targeted by Spanish club Atletico Madrid and Italian side Lazio.

Van der Vaart was ready to sign for Everton in the final week of the summer market, only for the Dutchman to reject the move after talks with the Real Madrid management.