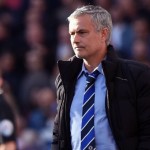 Reports are out claiming that Real Madrid have reportedly turned down a double bid from Chelsea for two star players.

The Sun is of the belief that the Blues have had a £100million offer for Gareth Bale and Raphael Varane rejected by the Spanish giants.

Jose Mourinho is a known admirer of French centre-back Varane while Welsh winger Bale has been linked with the Blues for some time.

It is believed that Chelsea have already been rebuffed in their pursuit of the pair who Real are determined to keep beyond this summer.

Terry : Beat United Twice And We’ll Be Back In It!