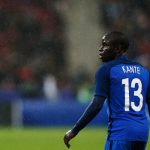 Reports are out claiming that Real Madrid have expressed interest in Leicester City midfielder N’Golo Kante.

The Daily Star says Manchester United are in pole position to sign the 25-year-old, who is also wanted by Liverpool, Arsenal, Chelsea and Manchester City.

El Confidencial says, however, Real Madrid are now keen on the France international following his fine performances at Euro 2016.

Kante, who has a £22m release clause in his contract, had a remarkable season last campaign.

He played in 37 of Leicester’s league games, chipping in with one goal and four assists.