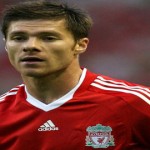 Finally! the summer’s seconds longest transfer saga is over as Liverpool confirmed today that pending a medical Xabi Alonso will be a Real Madrid player.

I had my doubts about Real Madrid, but this buy has taken the team to a whole new level, he will be spraying passes all over the field for Ronaldo and Benzema to collect and scoring that odd out of the box goal.

The 27-year-old, who had been with Liverpool for five seasons, will move for an undisclosed fee, subject to a medical,
“Liverpool Football Club this evening confirmed they had reached agreement for the sale of Xabi Alonso to Real Madrid, subject only to a medical,” read a statement on the Liverpoool website. “The terms of the deal will remain confidential and undisclosed.”
Real also confirmed the agreement in a statement on their website.
Spanish media reported the deal was worth around 30 million euros (£25.5 million), which would take Real Madrid’s close-season spending up to around 250 million euros.
Alonso came up through the youth ranks with Real Sociedad and was one of Rafael Benitez’s first signings when he took charge of Liverpool in 2004, moving for £10.5m.