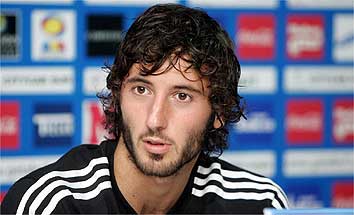 Interesting football news are out and it has been reported that young Spanish midfielder Esteban Granero has returned to Real Madrid after two years at city rivals Getafe and signed a four-year contract.

The 22-year-old midfielder is a product of the Real Madrid youth programme, who Spanish media reported had cost around 4 million euros is the club’s fifth purchase of the summer.

It is reported that Esteban Granero signed his contract late on Thursday and trained with his new team mates on Friday.

In a recent interview, Granero said that spending two years at Getafe have done him a lot of good and he personally feels that he is ready for a bigger challenge.

Granero also added that it is a good chance for him to try to carve out a place for himself in the Real Madrid team and he seriously believes that he can do it.

Esteban Granero is widely known for his versatility in midfield. He is also well known among fans as El pirata or The pirate. Granero can play as a playmaker or as support behind the strikers. His best attributes are passing, technique and shooting.