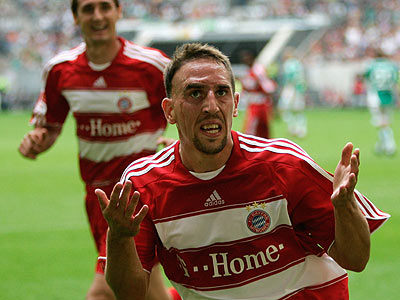 More transfer news are out and Real Madrid president Florentino Perez has announced that he wants to sign Franck Ribery from Bayern Munich for next season.

The Real Madrid president also said that it would be a huge satisfaction to have Ribery with the club next season but insisted that Real must first to talk to his club Bayern Munich. Perez also said that he will get in touch with his friends (chairman) Karl-Heinz Rummenigge and (coach) Uli Hoeness to ask them what they want to do with Ribery.

Perez claimed that he will tell them that this player is one of Real’s top targets and that he wants to discuss his possible move to Real.

Perez also added that he was “very optimistic” about signing Brazilian Kaka from Milan after he held talks with the Serie A side and the player’s father this week.