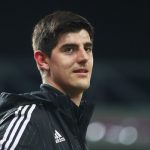 Reports are out claiming that Real Madrid are willing to make Chelsea goalkeeper Thibaut Courtois the richest transfer in history.

In England, it’s reported Courtois has informed new Chelsea manager Antonio Conte that he wants to leave this summer. A row with keeper coach Christophe Lollichon is being blamed for Courtois’ unhappiness.

Gazzetta dello Sport says Real are monitoring the situation and despite the success of Keylor Navas this season, are ready to bid for the Belgian.