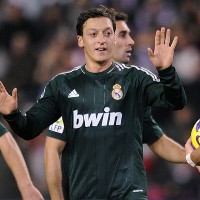 Mesut Ozil’s brace was decisive as Real Madrid twice came from behind to win at Valladolid.

Manucho twice put the hosts ahead from corners, but Madrid equalised through first Karim Benzema and then, on the stroke of half-time, Ozil.

The German then curled home a sublime second-half free-kick, his fifth goal in seven games, to seal the points.