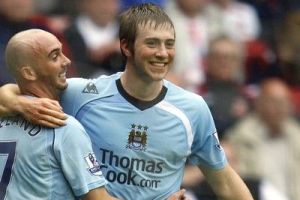 Interesting transfer news are out and it has been reported that Tottenham will make a £6million move for Manchester City midfield ace Michael Johnson in the January transfer window.

Spurs boss Harry Redknapp feels that his squad is short in the middle of the park and he is ready to test City’s resolve to hang on to a player who has fallen down the pecking order after a year out with injury.

Johnson, now age 21, was one of the hottest young prospects in the country when he broke into the City team three years ago but he has managed just one minute of league action this season since recovering from a persistent abdominal injury.

Redknapp told reporters that the central midfield is the one area that Tottenham don’t have a lot of players.

Redknapp added that Tottenham only has Palacios, Huddlestone and Jenas and that there is not much options in midfield.

Redknapp also revealed that he has still not decided whether to recall Jamie O’Hara when his loan at Portsmouth ends in January.

Benitez Fears Getting The Sack