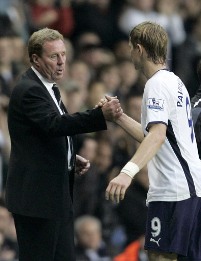 Tottenham manager Harry Redknapp has revealed that Roman Pavlyuchenko will not be heading home to Russia despite the 27-year-old striker being linked with a 10 million pound move to Spartak Moscow.

Redknapp also admitted that the striker, who scored in the 5-1 League Cup second win at Doncaster on Wednesday, is desperate to cement his place in Russia’s World Cup squad and needs to be playing regular first team football.

Redknapp also said that Pavlyuchenko’s people came down the training ground and wanted to have a meeting with him to talk about the player’s future. Redknapp also went on to say that the player does not want to go and they don’t want him to go as He is very happy.

His only concern was missing out on the World Cup as he needs to play for the Russian national team but it wasn’t a case of him wanting to leave.

Redknapp also said that the striker got no issues with the club, and that he is very happy in London and happy at the club.

United Will Be Feared In Europe, Say Berbatov