Reina To Be Offered £95,000-A-Week Contract By Liverpool 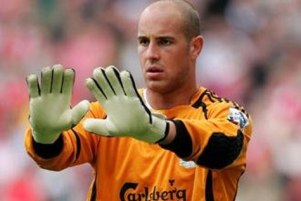 Pepe Reina will be offered a £95,000-a-week contract to pledge the next five years to Liverpool.

It has been reported that Liverpool plans to hold talks with the Spanish international keeper in January and make him the latest big name on a long-term deal.

Reina, now age 27, signed a five-year agreement only in the summer of 2007 in response to interest from former club Barcelona.

Now Anfield bosses want to lock him into a fresh contract, having done likewise to key men such as Fernando Torres, Steven Gerrard and Dirk Kuyt.

Tight purse strings mean any big-name signings in January are unlikely unless fresh investment is found, but the Reds are determined to splash cash to keep their prize assets.