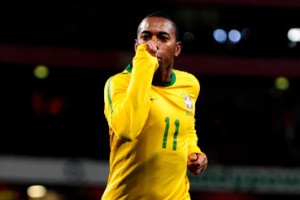 A Brazil wonder goal finished by Robinho helped them cruise to a 2-0 friendly victory over Republic of Ireland at the Emirates Stadium.

The ex-Manchester City man finished off a 22-pass move to slot the ball past Shay Given, adding to a Keith Andrews own-goal on the stroke of half-time.

The Santos player would have scored a third were it not for an assistant’s flag as Brazil put Ireland to the sword in a scintillating second period.