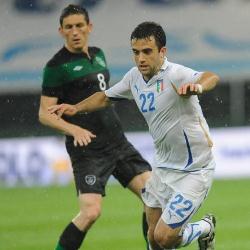 Keith Andrews and Simon Cox teamed up to fire Giovanni Trapattoni’s Republic of Ireland to a 2-0 victory over his native country Italy.

Blackburn midfielder Andrews’ sweet 36th-minute strike and a second from substitute Cox at the death secured a fourth successive win for the Republic and extended Trapattoni’s unbeaten record against the team he once managed to three games.

Italy enjoyed the lion’s share of the possession, but Ireland goalkeeper Mike Forde had few saves of note to make on his first senior international start.

Cesare Prandelli’s men may have dominated possession but they failed to make the most of it and when the chances came their way, the Irishmen took them with some aplomb in front of a crowd of 21,516.

Mario Balotelli Back In Italy Squad